The 10 Biggest Junkyards in America

Amazing Junkyards in the United States

While junkyards may be an eyesore for some people with all that rusted metal and those discarded parts, they’re also a haven for car enthusiasts everywhere. While most people look to get rid of junk cars, junkyard owners actively look to acquire old junked cars for their parts. Many American junkyards are modest affairs, an acre or two here and there. However, United States salvage is a $22 billion a year industry. Nearly 13 million cars are recycled every year in the United States. With environmental regulations and evolving land-use practices, junkyards are often pushed out of towns and into more rural areas. However, the junkyards we’re detailing in this post are not your average scrapyard. Take a look.

French Lake Auto Parts is located 60 miles west of Minneapolis and has been in operation for more than half a century. The scrapyard has over 100 acres filled with up to 10,000 vehicles on any given day. These cars are suitable for restoration as well as scrap metal recycling and car part recycling. You can find cars dating back to the 1920s in all makes and models. If you’re in the area and need a hard-to-find car part, French Lake Auto Parts is the place to call.

CTC Auto Ranch is in Denton, Texas, just an hour north of Dallas. The scrapyard specializes in muscle cars from the ’60s and ’70s, and it’s one of the most popular automobile recyclers in the country. The dry climate in Denton means that these old cars are rust-free and perfect for restoration. There are over 4,000 vehicles at CTC Auto Ranch, and their inventory changes daily. In addition to their inventory of restorable vehicles, the junkyard stocks sheet metal and car parts. 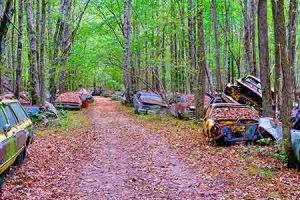 Located in Sandy, Oregon, Wildcat Auto Wrecking focuses on Chrysler vehicles and parts. It’s the only MoPar-specific junkyard in the Pacific Northwest. Wildcat Auto Wrecking has over 800 cars in its inventory, including plenty of vehicles suitable for restoration projects. The scrapyard is known for mostly rust-free auto bodies from the 1950s through the 1970s. Additionally, their part inventory encompasses nearly everything, including motors, glass, doors, bumpers, and more.

4. All Bikes Salvage Yard in Arizona

This junkyard in Arizona was a huge all-motorcycle salvage yard with thousands of old motorcycles and parts. Unfortunately, a fire in June 2013 that originated on the property destroyed more than 9,000 motorcycles. The fire then spread to a nearby trailer park and destroyed multiple mobile homes along with a shed. However, All Bikes Salvage Yard has recently been revived, though it is not the same as it was before the fire.

This scrapyard in Fresno began in 1928, and it was featured in a prominent photo series in the magazine Hot Rod. Turner’s Auto Wrecking encompasses over 100 acres of vintage cars and parts, and it’s a haven for car enthusiasts across the United States. If you’re looking for a hard-to-find part for your restoration project, there’s a significant chance that you can find it at Jerry Turner’s salvage yard.

Pinal Airpark is an airplane graveyard. Most of the planes in this impressive salvage yard have never flown. The reason over a hundred brand-new airplanes are sitting in a salvage yard? Financing. Whether the financing fell through or the buyer had no immediate use for the planes, dozens of airliners sit on the Arizona property in various states of decay. Some of the airplanes, such as the 747s, may eventually go back into service. But, for now, they’re sitting out there in an “airplane boneyard.” The salvage yard offers tours to visitors, as well.

MoPar enthusiasts, look no further than Steven’s Performance Salvage Yard in Anderson, Alabama. This scrapyard has hundreds of vehicles, mostly Dodge Challengers and Chargers. The junkyard boasts over forty years of selling parts and recycling vehicles, and it’s a must-visit for anyone restoring a Dodge Charger from the ’60s.

Old Car City U.S.A is one of the most famous junkyards in the world. Located in White, Georgia, Old Car City U.S.A has over 4,000 cars spread over 34 acres. The junkyard is a popular spot for high school seniors and their senior portraits, engagement sessions, and more among its backdrop of nature overtaking old vehicles. The property has over six miles of trails to explore, though the owner charges more if you plan to take photos during your visit.

Mojave Air and Space Port is a popular tourist attraction and a working spaceport. In addition to the airport, there are multiple airliners parked for your eyes’ delight. There’s even a restaurant where you can sit and gaze out at the out-of-service planes.

When you hear “Gettysburg,” you likely think of Abraham Lincoln and the Civil War. However, you should also think of it as a Corvair-enthusiast’s heaven. While the junkyard hosts multiple different car bodies from all makes and models, there are nearly 600 Corvairs on the lot. The ranch also offers service on all models of Corvair vehicles, including upholstery, painting, maintenance, and full remanufacturing of engines.

Looking To Get Rid Of Your Junk Car?

If you don’t happen to own an impressive junkyard like one of these or have the ability to scrap your vehicle for parts yourself, you might want to give us a call at Cash for Cars Northwest. We offer free junk car removal for Portland residents, and we offer fair prices for your car. No title? No problem. Call us today to get started, and we can answer any of your questions!